We know that not all men and women who entered the service had their "Home of Record" listed as the city where they lived.

We will work with the families to help add names to this memorial of men and women who were from Long Beach, CA. but had their home of record listed as another city, to do this we ask that you provide us with High School records that show that this person did go to school in Long Beach. Please contact us at our phone number with the information. 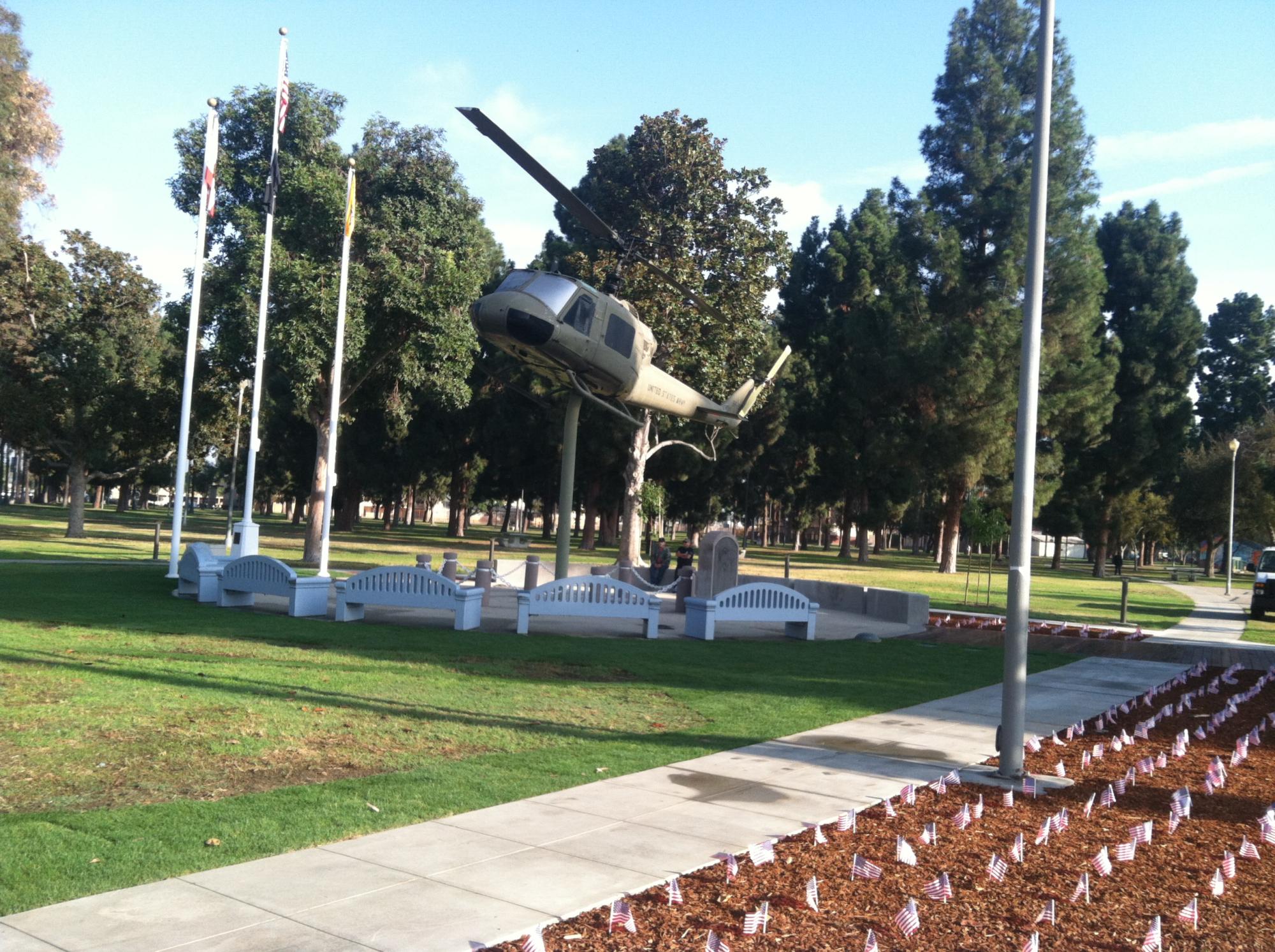 The mission of chapter 756 to provide a bonding unit for the Vietnam Veterans of Long Beach, CA. Primary goals include the interaction of membership with the inpatient veteran's at The Long Beach Veteran's Hospital. We have undertaken the mission of establishing a memorial to the 103 (+/-) veterans from the city of Long Beach that gave their lives in the war. This was accomplished by mounting an actual 'combat huey' in Houghton Park, Long Beach. This monument lists all 103 KIA's.

The pictures of the memorial are shown below. .

You can also donate to:

These pages are updated frequently.  Please press F5 on your keyboard to refresh each page.

Our new address is:

There is a group picture of State Convention Officers and associates

The picture of Max Stewart, Mike Kennedy, and Conrad Gomez

[Note: Go to our Facebook page for these pictures]

1. Max is the Founder of the Chapter and past president

all three of us served in Vietnam.

State side all three of us were located throughout the States and were security for nuclear weapons, from B-52 (alert bombers to missiles and jet interceptors )

Thanking all members who made this happen.

Thank You for your support

I am also a member of the LA/OC U.S. Air Force Security Forces Assoc at Los Alamitos Joint Training Base

You can now donate directly to VVA Chapter 756

in order to help us fund needed activites for Veterans and current Military Members, and their organizations.

“Never again will one generation of veterans abandon another.”

1.Our chapter has purchased dozens of movie tickets for the Veteran patients at The Tibor Rubin Long Beach VA Hospital, so that the patients can be treated to a "Night out" at the movies. About five to seven Veterans go on average along with Veteran Volunteer escorts.  The trip includes popcorn, candy, and soda pop.  The chapter does this once a month and has been for over 14 years. A Knotts Berry Farm Dinner outing is planned for November.

2. Chapter 756 was Honored by City of Lakewood for their Veterans' community work.

3. Chapter 756 donates monetary and other assistance to:

4. Chapter 756 members participated as color guards for various Memorial and other ceremonies at the American Gold Star Manor.

5. Chapter 756 members show up in support of the Vietnamese Community of Southern California's Westminster Memorial on every 1st Sunday of the month for the "Flag Salute" and Memorial Prayers.

6. Chapter 756 has sponsored Art Contests at the Westminster and Woodbridge High Schools. Scholarship money has been donated for "Price of Freedom" themed art to winning students.

7. Chapter 756 continues to Educate Veterans on the prevention of suicide and directs them to obtain proper help and benefits.

8. Chapter 756 provides for food cards to be distributed to Veterans and Gold Star families at The American Gold Star Manor.